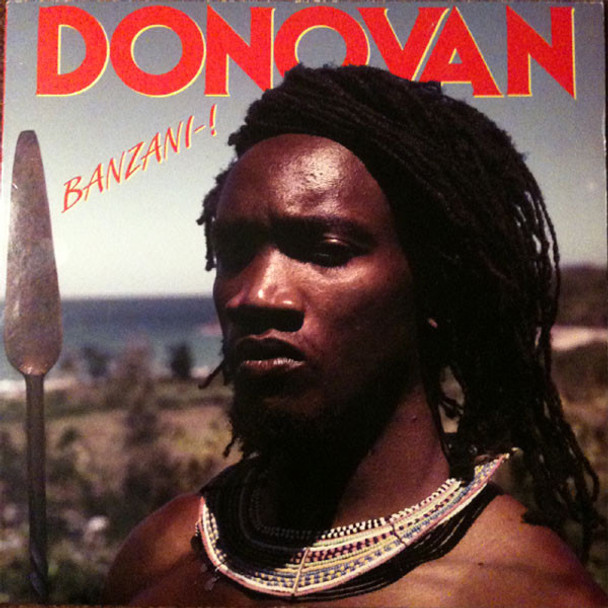 Donovan "Banzani-!" (1989 Mango Records an Island Records, Inc. pressing) Vinyl album - Rebel Side - Banzani-! (Own Soldier);Devil Workshop; Down in the Ghetto; I'm not Afraid; Me Nuh Business. Soul Side - Crazy Daisy; Days of Sorrow; Plantation; Serious Man; Ain't no Love at All

Impeccably produced by Jack Ruby, Banzani-! is a simmering blend of roots, rockers, and dancehall, powered by Sly & Robbie's powerful rhythms. Released in 1989, the album was perhaps just a tad too early to take advantage of the re- emergence of culture in the dancehall scene, and Donovan never gained the recognition that he so richly deserved. Too young to be part of the roots revival that brought veteran artists back to the fore, yet not quite anthemic enough to appeal to the dancehall crowds, the singer slipped between the musical cracks. His powerful delivery also hung between scenes, rootsy in feel, but slightly clipped, neither cultural singer nor dancehall rapper. Thematically, however, his songs are pure dread, from the title track's declaration of "I'm my own soldier," to the sufferer's "Days Of Sorrow," the cultural "Down In The Ghetto," to the rastafarian fired "Devil Workshop." Although harkening back to the roots heyday of the late 1970s, the tracks are much wordier than anything from that day. Through his lyrics, Donovan painting entire stories and vignettes, the closest comparison is to rapso, but that's an equally ill-fit. The Mango label probably thought they could market the A- side to the roots crowd, with the musically lighter weight b- side intended for the world music audience. Unfortunately, all those wonderful words got in the way. For once you start listening you can't help but be drawn in, and then you begin to hear the message, and it all becomes a bit uncomfortable for the granola crunchers. That's the problem with revolution, it's tough to sell to Babylon. Thus one of the most intriguing albums around now lies sadly neglected, shunned by world music lovers, ignored by the dancehalls. A pity, for musically and lyrically this album is absolutely marvelous. (Jo-Ann Greene)

Scritti Politti "Tinseltown to the Boogiedown"

Technotronic "Techno Medley/Rockin' Over the Beat"