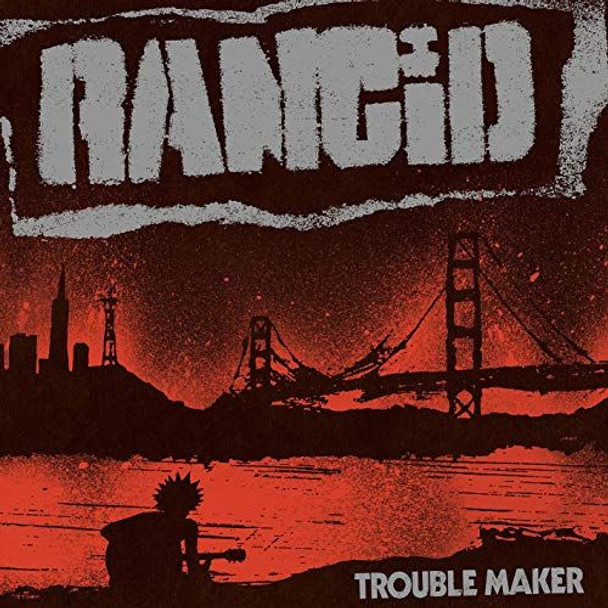 Rancid "Trouble Maker" Vinyl LP (includes Digital Download Card) (2017 Epitaph Records). Tracklist: Track Fast; Make It Out Alive; Molly Make Up Your Mind; I Got Them Blues Again; Beauty of the Pool Hall; Say Goodbye to Our Heroes; I Kept a Promise; Cold Cold Blood; This Is Not the End; We Arrived Right on Time; Go on Rise Up; Ghost of a Chance; Telegraph Avenue; Intimate Close Up of a Street Punk Trouble Maker, An; Where I'm Going; Buddy; Farewell Lola Blue; All American Neighborhood; Bovver Rock and Roll.

Rancid is an American punk rock band formed in Berkeley, California in 1991. Founded by former members of the band Operation Ivy, Rancid is often credited as being among the wave of bands that revived mainstream interest in punk rock in the United States during the mid-1990s. Over their 31-year career, Rancid retained much of its original fan-base, most of which was connected to its underground musical roots.

Rancid has had two lineup changes since its inception, with Tim Armstrong and Matt Freeman being continuous members. Their current lineup consists of Armstrong on guitar and vocals, Freeman on bass and vocals, Lars Frederiksen on guitar and vocals, and Branden Steineckert on drums. The band was formed by Armstrong, Freeman, and former drummer Brett Reed, who left the band in 2006 and was replaced by Steineckert. This lineup recorded their first album, with Frederiksen joining the band on their subsequent tour.

To date, Rancid has released nine studio albums, one split album, one compilation, two extended plays, and a series of live online-only albums, and has been featured on a number of compilation albums. The band has sold over four million records worldwide, making it one of the most successful punk rock groups of all time. The band rose to fame in 1994 with its second studio album, Let's Go, featuring the single "Salvation". In the following year, Rancid released its highly successful album ...And Out Come the Wolves, which produced its best-known songs "Roots Radicals", "Ruby Soho", and "Time Bomb", and was certified gold and platinum by the RIAA, selling over one million copies in the United States alone. Its next five albums – Life Won't Wait (1998), Rancid (2000), Indestructible(2003), Let the Dominoes Fall (2009), and ...Honor Is All We Know (2014) – were also critically acclaimed, though not as successful as ...And Out Come the Wolves. Their most recent studio album, Trouble Maker, was released on June 9, 2017, and they are currently working on a follow-up album. (Wiki)

When they recorded their ninth album, Trouble Maker, the venerable punks of Rancid had been working together (give or take a drummer) as a band for 25 years. It would follow that maybe the record would be nostalgic, and it is. Both lyrically and musically, the 19 songs have the blurry feel of old Polaroids, as the bandmembers stick to their guns and dish out tales of past glories. Tim Armstrong's weatherbeaten vocals are made for the task; his marbled crooning on "Telegraph Avenue" and ragged shouting on "An Intimate Close Up of a Street Punk Trouble Maker" are like flip sides of the same classic punk coin. He and the rest of the band crank out very Rancid-sounding punk, all guitar riffs and pounding drums, with a side or two of ska ("Where I'm Going") and glammy heavy metal ("Say Goodbye to Our Heroes") for good measure. Trouble Maker is exactly what a Rancid fan would expect a Rancid album to sound like, and the band delivers the requisite gutter chants, spiky attitude, and spit-covered microphones. ~ Tim Sendra

Rihanna "If It's Loving That You Want" Vinyl 12"